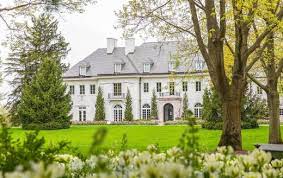 Lilly House is a National Historic Landmark and exemplary example of a 20th century country estate. Originally built for Hugh McKennan Landon in 1913, the house served as the focal point of the Oldfields estate.

The Lilly House was purchased by J.K. Lilly Jr., the late Indianapolis businessman, collector, and philanthropist, in 1932 and it served as his family’s home until his death in 1965.

Today, the first floor of Lilly House has been restored to closely resemble its appearance in the 1930s. In fact, the majority of the furnishing and decorative arts objects featured belonged to the Lillys and were used in the home. The upper level of the Lilly House hosts a variety of events and public programs offering expansive views of Oldfields’ landscape and gardens.

On the lower level, don’t miss the garage, complete with an early 20th century-era car on loan from the Indianapolis Motor Speedway Museum.

Lilly House is part of the Newfields complex, which also includes