Icons from the Prosopon School of Iconology and Iconography 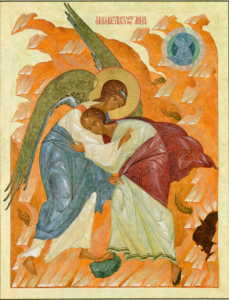 The Museum of Russian Icons will premiere Wrestling with Angels, an exhibition of forty-six luminous contemporary icons by sixteen iconographers from the Prosopon School of Iconology and Iconography. Exploring the recent renaissance of this ancient tradition, the exhibition will feature icons by the founder of the Prosopon School, Vladislav Andrejev, along with works by master iconographers, instructors, and apprentices.

​​Visitors to the exhibition will encounter the icons as they would within an Orthodox church, beginning with depictions of events and persons from Hebrew scripture that would be found in the narthex (or vestibule); and continuing with icons that would surround the congregation in the nave including images of Jesus and his mother Mary (known in the Christian East as the Theotokos, Greek for “God-bearer”). The exhibition concludes with icons that would be found on or behind the iconostasis (the screen or wall that separates the nave from the altar), including icons of the principal feasts of the Christian liturgical year as well icons of mystical subjects that point to the second coming of Christ.

Wrestling with Angels is a reference to the first icon on view, a work depicting the mysterious wrestling match between the patriarch Jacob and an unidentified stranger as described in Genesis. After struggling all night without prevailing, Jacob insists on a blessing before he will relinquish his hold on the man. Although the stranger will not disclose his name, he renames Jacob as Israel (Hebrew for “he who contends with God”), inspiring Jacob to exclaim “for I have seen God face to face and my soul has been delivered.” Not only the inspiration for the title of the exhibition, but it is also an apt image for the timeless universal struggle between humankind and the mysteries of the unknown.

A centerpiece of the exhibition is the deisis (Greek for “supplication”), a group of five large icons with Christ in Glory at its center. A deisis is a prominent image on an iconostasis and depicts the Theotokos and John the Baptist on either side of Christ interceding on behalf of humankind and often flanked by other saints. The deisis in this exhibition includes portrayals of Saints Gregory Palamas and Gregory the Theologian, whose mystical theology is central to the Prosopon School’s teaching.

Another group of icons forms the Synaxsis (Greek for “assembly”) of the Archangels, which surround a large icon of the Logos Emmanuel, an image of a youthful Christ as the Logos (Greek for “word”) through whom God “spoke” creation into existence. This is he who Christians also call Emmanuel (Hebrew for “God with us”), as foretold by Isaiah. The depiction of Christ with wings is rare but not without ancient precedent, evoking the movement of God with, and within, the faithful.