William Schaaf: The Way of the Equine 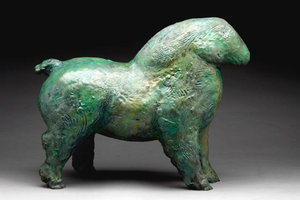 For many years, Bill Schaaf has explored equine imagery in his paintings and sculpture. The horse figure as an iconic metaphor for power, sensuality, transition and beauty has occupied a dominant place in his visual vocabulary.

At times, the figures are relatively representational; but more often than not, take on a form that is derived from the idea of a horse, yet defining new ways of interpreting the glorious nature of these animals that have partnered with humankind since virtually the dawn of civilization.

"Whether resulting from Schaaf’s explorations in clay, wood, bronze, or pigments, he always embraces the Zen notion of the 'accidental gift' from the material, from the fire, from gestural markings, layer over layer, often year after year, until a resultant imagery or form is uncovered; an enlightened moment if you will, a discovery and awakening. Self-exploration is an integral part of the process of artistic discovery for Schaaf. Void of the usual artist ego, he is more interested in discovering himself, his spirit, as he finds the art within the material with which he chooses to negotiate the journey."  Ken Rollins, President, Rollins Fine Art, PMA Director 1981-1994.