Reckoning with “The Incident”: John Wilson’s Studies for a Lynching Mural 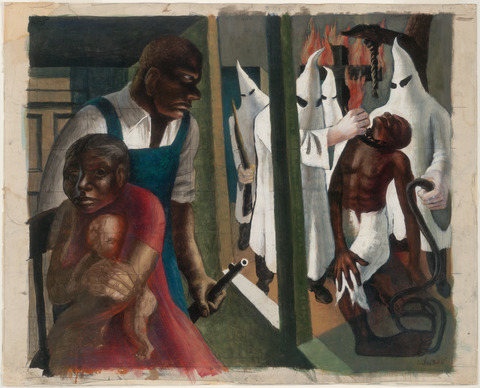 In 1952, while a student at La Esmeralda—Mexico’s national school of art—American artist John Wilson (1922–2015) painted a powerful mural that he titled The Incident. The fresco depicted a scene of a racial terror lynching at the hands of the Ku Klux Klan, as witnessed by a young African American family. Although the mural is no longer extant, this exhibition brings together publicly for the first time nearly all of Wilson’s known preparatory sketches and painted studies for it, as well as related prints and drawings.

Inspired by the political and social activism of the Mexican muralists, in particular José Clemente Orozco, and haunted by images of lynchings that he had seen in newspapers as a child, Wilson revisited the subject of The Incident over many years as a way of grappling with racial violence, both past and present. The works on view, some disturbing in content, encourage contemporary viewers to do the same.