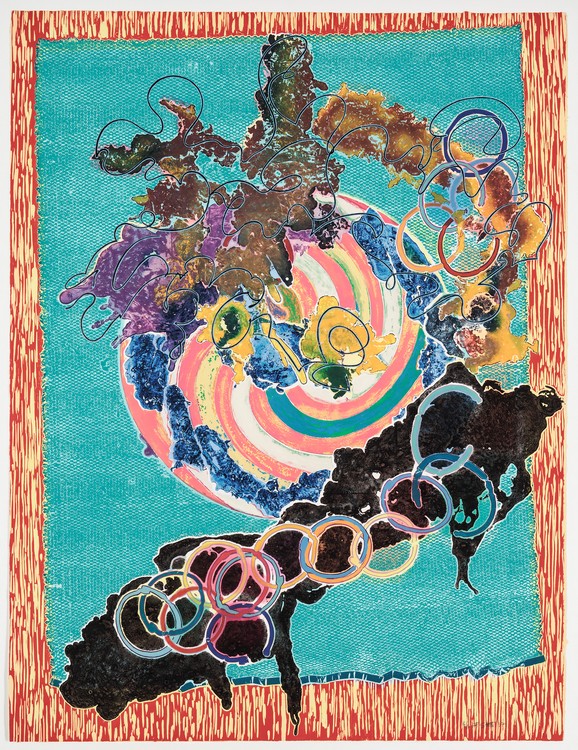 Between 1984 and 1999, the American artist Frank Stella executed four ambitious print series, each of which was named after a literary work that had a distinctive narrative structure: the Passover song Had Gadya, a compilation of Italian folktales, the epic novel Moby Dick, and the illustrated encyclopedia Dictionary of Imaginary Places.

Through these four bodies of work, Stella evolved printmaking projects of unprecedented scale and complexity that both transformed the artist’s visual language—as well as his working process in all media—and represent a technical and expressive milestone in printmaking.

Featuring forty-one prints from these four major series alongside their literary catalysts, Frank Stella Unbound: Literature and Printmaking will be the first exhibition to focus exclusively on the vital role that world literature played in his powerful exploration of the print medium.

Whether or not you go, the exhibition catalog, Frank Stella Unbound: Literature and Printmaking, looks at the vital role of literature in the development of the artistic practice of Frank Stella (b. 1936), in the four transformative series of prints made between 1984 and 1999. Each of these series is named after a literary work—the Had Gadya (a playful song traditionally sung at the end of the Passover Seder), Italian Folktales, compiled by Italo Calvino, Moby-Dick by Herman Melville, and The Dictionary of Imaginary Places by Alberto Manguel and Gianni Guadalupi. This investigation offers a critical new perspective on Stella: an examination of his interdisciplinary process, literary approach, and interest in the lessons of art history as crucial factors for his artistic development as a printmaker. Mitra Abbaspour, Calvin Brown, and Erica Cooke examine how Stella’s dynamic engagement with literature paralleled the artist’s experimentation with unconventional printmaking techniques and engendered new ways of representing spatial depth to unleash the narrative potential of abstract forms.
﻿

Select Frank Stella Unbound: Literature and Printmaking to learn more, or to add this book to your Amazon shopping cart.