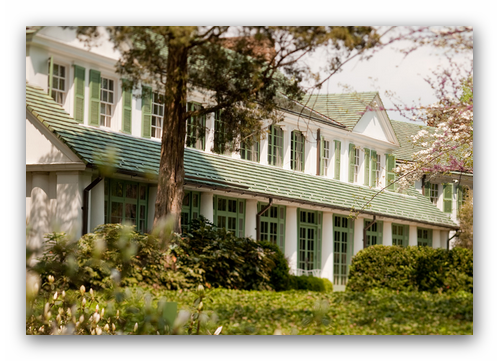 Described in 1917 as an “experiment station,” Reynolda Farm was a model farm and dairy where local farmers could learn the newest techniques in scientific agriculture, dairying, livestock raising, and horticulture. Piedmont farmers were reliant upon growing tobacco as the regional cash crop, but Katharine Smith Reynolds, despite the origins of her husband’s fortune, intended her farm to demonstrate that diversified agriculture could be both healthful and profitable. But the farm was also a community of people. Years before the Reynolds family moved to Reynolda in December 1917, the barns and cottages were completed, and Reynolda Village had become a thriving community of farm supervisors and workers and their families. Meanwhile, during this time of segregation, African American farm laborers lived in a separate community known as Five Row, located on the edge of the estate, a quarter mile walk from the Village. Drawn largely from the historic photographs and manuscript collections from the Reynolda House Archives, many on display for the first time, this new exhibition will illustrate the impact of Reynolda Farm on local agriculture and the context and conditions of life at Reynolda.