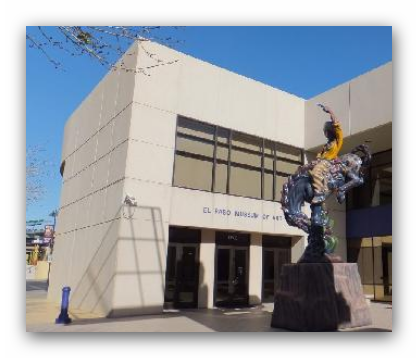 The upcoming retablo exhibition focuses on an uncommon retablo subject, the representation of female saints. The El Paso Museum of Art has become the second largest repository of 19th-century Mexican retablos in the United States, with a collection of 900. Out of the entire retablo collection only 5% showcase female saints as the main subject. Though the subject matter is considered hard to find in retablo art, it is an important theme present in the Museum’s collection. Female Saints and Heroes celebrates the piety, wisdom, and physical suffering of female saints and also highlights their influence on the lives of 19th-century Mexican women.

Devotional images created in the 19th century of female saints were specifically targeted towards a female audience. They were used as practical role models and served to reassure the viewer that she could achieve an intimate spiritual association with Christ. Female saints were portrayed in retablos in a manner that would illustrate the accomplishments of the saints’ labor and determination and highlight their purity and connection with God. Female Saints and Heroes includes the representation of ten saints who encompass this idea: Saint Anne, Saint Barbara, Saint Hedwig, Saint Helen, Saint Gertrude the Great, Mary Margaret Alacoque, Saint Rita of Cascia, Saint Rosalie of Palermo, Saint Teresa, and Saint Wilgefortis/Saint Librada.

A special feature of this exhibition is the representation of women in ex-votos. Ex-votos are narrative images displayed publicly in churches or shrines and used to commemorate a miracle and give thanks to a particular religious figure. They usually include an image of the saint being thanked and a portrayal of the person who commissioned the retablo. The depiction of female donors in ex-votos is important because it showcases women as patrons of the arts in the 19th and early 20th centuries. It also provides proof that commissioning art was an important aspect in the devotional life of Mexican women.