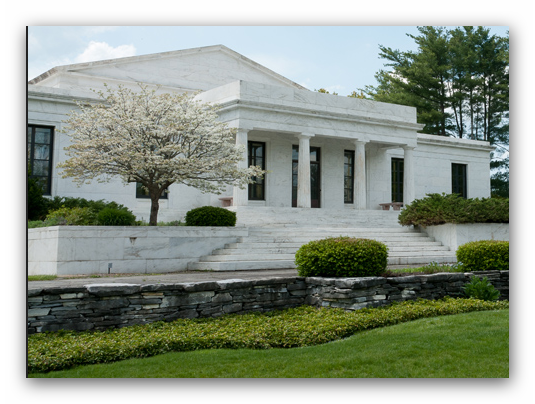 from the Rodbell Family Collection

Japanese Impressions will be the first exhibition in the history of the Clark to focus specifically on Japanese prints. It will feature selections from a foundational gift made in 2014 of sixty-three woodblock prints from the Rodbell Family Collection. A century of Japanese color woodblock printing is represented by three generations. The imagery includes waterfalls by Katsushika Hokusai (1760–1849), selections from the renowned 100 Famous Views of Edo by Utagawa Hiroshige (1797–1858), mountain landscapes by Kawase Hasui (1883–1957), and the Zen architecture prints of Kiyoshi Saitō (1907–1997).

Two giants of nineteenth century ukiyo-e printmaking, Hokusai and Hiroshige worked collaboratively with woodcutters, printers, and publishers to create their brightly hued woodblock prints. Their style was marked by dramatic depictions of space, and their subjects ranged from female beauties and actors to scenes from literature and landscapes. Hokusai’s and Hiroshige’s subjects and radical compositions deeply impacted the Impressionists and Post-Impressionists in Europe and America, where their prints were collected avidly after Japan opened to the west in 1854. This influence, known as Japonisme, has been addressed frequently in books and exhibitions. Less well known is the impact ukiyo-e artists had on subsequent generations of printmakers in Japan. The first half of the exhibition will focus on ukiyo-e artists, while the second half will feature prints from the 1920s through the 1970s.

The artistic generation of the 1920s and ‘30s was made up of two related but oppositional groups, each striving to revitalize ukiyo-e. The shin-hanga or “new print” movement maintained a division of labor among artist, printer, and publisher, but the production drew inspiration from the Impressionists and was marketed to a largely western audience. The sōsaku-hanga or "creative print" movement encouraged artists to cut and print their own blocks and thereby foster self-expression. Both schools favored Japanese subject matter, especially landscapes with bridges and reflective water. Growing out of the sōsaku hanga sensibility, Saitō represents a third generation of woodcut artists who balanced tradition and innovation. This section of the exhibition will feature modern ceramics by Shōji Hamada, who strove to create exquisitely fired bowls, plates, and pots within a traditional craft and folk aesthetic.

Adele Rodbell has been a volunteer docent at the Clark since 1978. She and her late husband Donald lived in Japan from 1969–1972. During this time, Adele took an art history class and became interested in Japanese art, especially prints and ceramics—an active interest that continues to this day. She acquired a few prints in Japan, but her passion for the medium carried back to the United States, where she continued to expand her collection.