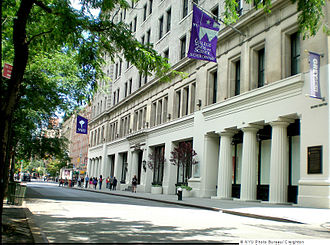 The exhibition’s story begins when Barr and Johnson traveled to Europe in the late 1920s and early 1930s and discovered that leading European architects—such as Le Corbusier, J. J. P. Oud, and Ludwig Mies van der Rohe–were rejecting ornament in favor of a purity of form. Barr and Johnson dubbed this new architectural language “International Style.”

Featuring more than 100 objects—including furniture, photographs, and industrial and graphic design—the exhibition traces the development of modern design from its origins at Bauhaus to Barr and Johnson’s radical experiments in their homes in New York City to MoMA’s nationally influential exhibition in the 1930s and beyond.

Whether you go or not, the exhibition catalog, Partners in Design: Alfred H. Barr Jr. and Philip Johnson, tells of the birth of modernism in the 1920s and 1930s in the United States, a new aesthetic, based on the principles of the Bauhaus in Germany: its merging of architecture with fine and applied arts; and rational, functional design devoid of ornament and without reference to historical styles. Barr Jr., the then 27-year-old founding director of the Museum of Modern Art, and 23-year-old Philip Johnson, director of its architecture department, were the visionary young proponents of the modern approach, forging a path that would transform the museum world and change the course of design in America. Barr and Johnson experimented with new ideas in museum ideology, extending the scope beyond painting and sculpture to include architecture, photography, graphic design, furniture, industrial design, and film; with exhibitions of ordinary, machine-made objects (including ball bearings and kitchenware) elevated to art by their elegant design; and with installations in dramatically lit galleries with smooth, white walls.

Select Partners in Design: Alfred H. Barr Jr. and Philip Johnson to place this book in your Amazon shopping cart.