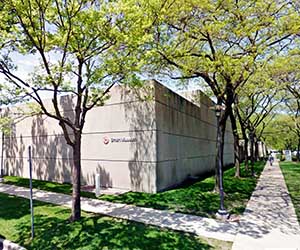 Smart Museum of Art at the University of Chicago

The group of postwar artists nicknamed the Monster Roster established the first unique Chicago style. Spearheaded by Leon Golub and united by a shared interest in the figure during a period that is often seen as dominated by abstraction, the group created deeply psychological works that drew on classical mythology and ancient art.

This is the first major exhibition to examine the history and impact of the Monster Roster, which has been overlooked despite being one of the most important Midwestern contributions to the development of American art. It examines not only the complex aesthetics and personal styles of Golub and his compatriots—including Cosmo Campoli, June Leaf, Dominick Di Meo, Seymour Rosofsky, and Nancy Spero, among others—but also uncovers the Monster Roster’s relationships with preceding generations of Chicago artists and differences from the well-known Chicago Imagists who followed.

Monster Roster brings together approximately 60 major paintings, sculptures, and works on paper from the Smart Museum and other collections in order to provide the definitive account of the movement, from the formation of Exhibition Momentum in 1948 to the group’s dispersal in the mid 1960s.

Whether you go or not, the exhibition catalog, Monster Roster: Existentialist Art in Postwar Chicago , includes an overview of the artists involved, such as Leon Golub, June Leaf, Seymour Rosofsky, and Nancy Spero; an introduction to the historical context surrounding the group’s emergence in the 1950s; and a discussion of Monster Roster prints. In addition, key texts can be found reprinted here, such as Jean Dubuffet’s 1951 lecture “Anticultural Positions” and Franz Schulze’s 1972 essay “Chicago: The Setting and the Group.” Containing full-color reproductions of many Monster Roster works, ephemera, and historical photographs, as well as a detailed chronology and exhibition history, Monster Roster is a long-awaited history of one of the most essential Midwestern contributions to American art.