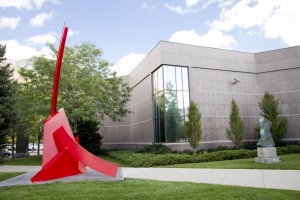 Focused on the first half of the 20th century, these 90 pieces reveal the multiple and changing brands of the American West during a complicated time of modernization, war, and racial unrest. It was a time of great change—for cowboys, for Native Americans, for the land itself—and it's all captured here in that magical sense of light for which the region is famous.

This exhibition includes celebrated artists such as Frederic Remington and N.C. Wyeth, and features members of the New Mexican Taos Society of Artists and California-based artist Maynard Dixon. The paintings and sculptures are juxtaposed with film clips of how the West was branded by Hollywood. That narrow view of the West as a land of violence and action contrasts sharply with dignified images of Native Americans and spectacular natural wonders carved over millions of years.

Come stand before works where the artist raced to capture a moment or a scene before it was gone forever. Come find the mid-point between myth and history, and revel in the beautiful scenery and rich heritage of the American Southwest.

Branding the American West: Paintings and Films, 1900 – 1950  is a traveling exhibition developed as a collaboration between the BYU Museum of Art and the Stark Museum of Art in Orange, Texas.

Whether you go or not, the exhibition catalog, Branding the American West: Paintings and Films, 1900–1950, illustrated with more than 150 images, examines select paintings and films to demonstrate how the Taos Society of Artists and the California-based artist Maynard Dixon both enhanced and contradicted earlier representations of the West. Prior to this period, American art tended to portray the West as a wild frontier with untamed lands and peoples. This trademark perspective began to change, however, when in the early twentieth century artists enamored with the Southwest stamped a new imprint on their paintings.

Click Branding the American West: Paintings and Films, 1900–1950 to place this book in your Amazon Shopping cart.