The Art of Romaine Brooks 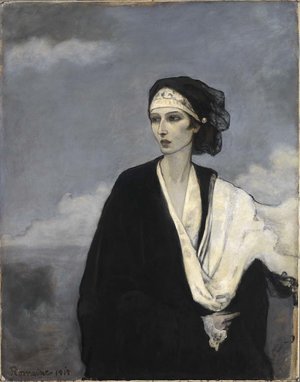 Romaine Brooks (1874 –1970) lived most of her life in Paris where she was a leading figure of an artistic counterculture of upper-class Europeans and American expatriates, many of whom were creative, bohemian, and homosexual. Brooks crafted an androgynous appearance that challenged conventional ideas of how women should look and behave, and these ideas extended to many of the portraits she painted in the 1920s, which are some of her best known works. This exhibition brings together 50 of her paintings and drawings.

Early in her career, Brooks adopted a muted palette primarily of black, white, and various subtle shades of gray, sometimes with highlights of ochre, umber, or red, strongly reminiscent of James McNeill Whistler, whose paintings she admired. Her first exhibition in1910 at the prestigious Durand-Ruel gallery in Paris established her reputation as an artist. Working in Paris at a time when Pablo Picasso and other modernist artists were challenging traditional approaches to art, Romaine Brooks maintained her independence from contemporary art movements.

Brooks all but abandoned her art career by the late 1930s. Because she was independently wealthy and did not depend on her art for income, some of her most important paintings were still in her possession when she died. Brooks’ exploration of gender and sexuality in many of her portraits led to renewed interest in her work in the 1980s, and her powerful images are still compelling to audiences today.

Whether you go or not, Amazons in the Drawing Room: The Art of Romaine Brooks presents a comprehensive and definitive analysis of the life and art of Romaine Brooks, reproducing for the first time in color thirty-four of the forty nudes and portraits she painted, as well as thirty-seven pen-and-ink drawings. The first female painter since Artemisia Gentileschi in the 17th century to portray an ideal of heroic femininity, Romaine Brooks shaped an image of the androgynous New Woman for the 20th century.

Select Amazons in the Drawing Room: The Art of Romaine Brooks to learn more, or to place this book in your Amazon shopping cart. Your Amazon purchase through this link generates a small commission that will help to fund the ArtGeek.art search engine.