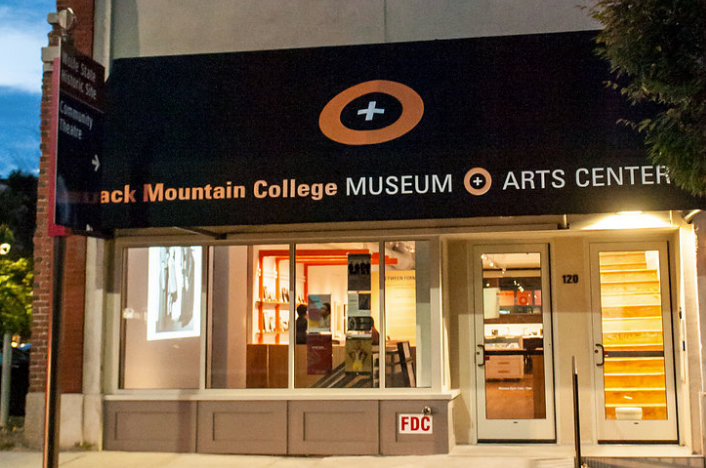 Black Mountain College began in 1933, born out of a desire to create a new type of college based on John Dewey’s principles of progressive education. The founders of the college believed that the study and practice of art were indispensable aspects of a student’s general liberal arts education.

Arts advocate Mary Holden founded BMCM+AC in 1993 to celebrate the history of Black Mountain College as a forerunner in progressive interdisciplinary education and to explore its extraordinary impact on modern and contemporary art, dance, theater, music, and performance. Today, the museum remains committed to educating the public about BMC’s history and raising awareness of its extensive legacy.

The events that precipitated the college’s founding occurred simultaneously with the rise of Adolf Hitler, the closing of the the Bauhaus school in Germany, and the beginning of the persecution of artists and intellectuals in Europe. Some of these refugees found their way to Black Mountain, either as students or faculty.

Legendary even in its own time, Black Mountain College attracted and created maverick spirits, some of whom went on to become well-known and extremely influential individuals in the latter half of the 20th century. A partial list includes Willem and Elaine de Kooning, Robert Rauschenberg, Josef and Anni Albers, Jacob Lawrence, Merce Cunningham, John Cage, Cy Twombly, Kenneth Noland, Susan Weil, Vera B. Williams, Ben Shahn, Ruth Asawa, Franz Kline, Arthur Penn, Buckminster Fuller, M.C. Richards, Francine du Plessix Gray, Charles Olson, Robert Creeley, Dorothea Rockburne and many others who have made an impact on the world in a significant way.​