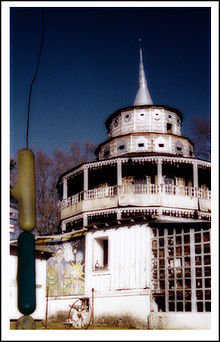 Paradise Garden was the home and workplace of Baptist minister and folk artist Howard Finster. It is now a public park dedicated to his life and art.

“I built the park because I was commissioned by God. I started the Garden in 1970 about one hundred feet into the backyard, built a cement walk and put up a haul shed and started to display the inventions of mankind. My park is a memorial to inventors. The inventors don’t get recognition. They don’t have an Inventor’s Day. To represent them, I’m trying to collect at least one of every invention in the world.”  Rev. Howard Finster

Reverend Howard Finster, a self proclaimed  “Man of Visions”, Finster was one of America’s most widely known and prolific self-taught artists producing over 46,991 pieces of art before his death in 2001. He saw himself as a sacred artist, tirelessly recording his visionary prophesies and providing glimpses of a celestial outer space world that God revealed to him. These visionary journeys were very real for Finster, providing a limitless variety of images for his creative endeavors.

Born in rural Alabama in 1916, Finster went on to become a preacher, tent revivalist, and “master of 22 different trades” before building his roadside tribute to inventors the Plant Farm Museum. Later dubbed “Paradise Garden,” this rock and junk encrusted wonderland became the focus of Finster’s life work. In 1976, however, this focus shifted. As he was using his fingers to apply paint to a refurbished bicycle, Finster noticed that the paint smudge on the tip of his finger had formed a human face. A voice spoke to him, saying, “paint sacred art.” Finster began churning out thousands of sermon-laden artworks with subjects ranging from historical characters and popular culture icons like Elvis Presley to evangelistic fantasy landscapes and futuristic cities. Most works are meticulously coated in Finster’s own hand-lettered words and Biblical verse.