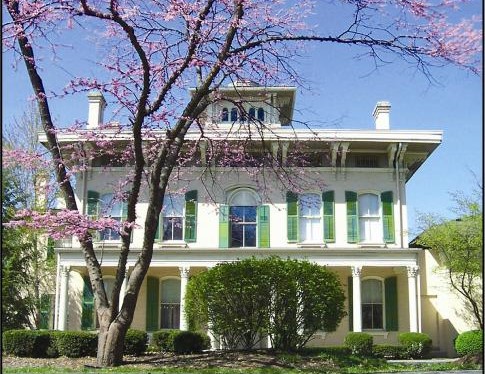 Edwards Place, built in 1833 and remodeled in 1857, is an historic house museum that tells the story of social and domestic life in Abraham Lincoln's Springfield, Illinois. Newly restored (2015) to its antebellum glory, this Italianate mansion was one a center for social activity in Springfield.

Prominent citizens and politicians such as Lincoln, Stephen A. Douglas, David Davis, and numerous governors, judges, lawyers, and politicians were entertained at lavish dinner parties and the grounds played host to many summer picnics and political rallies.

Edwards Place was the home of attorney Benjamin Edwards, youngest son of Governor Ninian Edwards and brother-in-law of Mary Lincoln’s sister Elizabeth. Although the Lincolns did not court or marry here, Edwards Place is currently home to the "courting couch" on which Lincoln and Mary Todd sat during the early days of their romance, originally the property of Ninian Edwards.

Edwards Place has been owned and operated by the Springfield Art Association, a private, non-profit visual arts organization, since 1913.