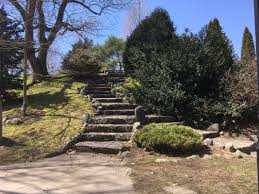 The 14-acre Wilcox Park has been on the National Register of Historic Places since 1973 as Wilcox Park Historic District. The historic district includes 84 houses/buildings of the neighborhood surrounding the park covering a 50-acre area, including the main post office and library of the town of Westerly. The Park is operated by the Westerly Library.​

Wilcox Park was the 1898 bequest of Harriet Wilcox, widow of Stephen Wilcox who invented the non-explosive boiler and co-founded the giant engineering firm of Babcock & Wilcox.

Wilcox Park was designed in 1898 by Warren H. Manning, who had been an associate of Frederick Law Olmsted. It was originally dominated by plants native to the region, but in the 1960s efforts began to develop the park as an arboretum. Specialties include a dwarf conifer garden, herb garden, garden of the senses, and perennial garden, set off by fine Westerly granite masonry designed by landscape architect Arthur Shurcliff in 1929-1930.