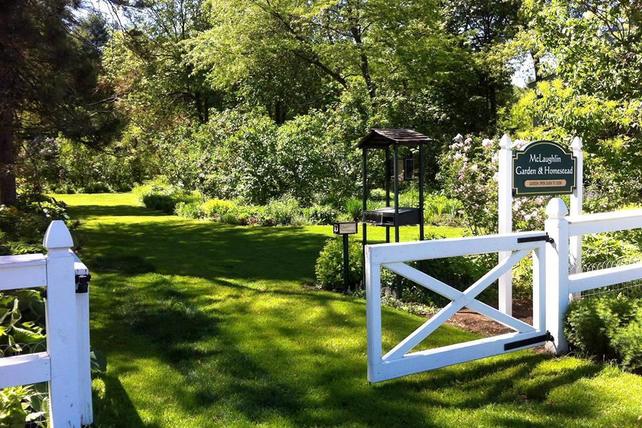 In 1936 Bernard McLaughlin began planting what would become one of Maine’s most beloved gardens. A century-old Maine farmstead with massive stone walls and huge barn provided a unique background for his sophisticated collection of trees, woody shrubs, and perennials. With no formal horticultural training, tending the garden single-handedly for most his life, he eventually became known as the “Dean of Maine Gardeners.” Bernard McLaughlin died at age 98 in 1995.

Now more than eighty years old, the landmark two-acre garden is under the stewardship of a nonprofit organization formed to preserve the historic home, barn and garden for the public. From May to October, the Garden is open daily to the public free of charge.

The formal garden features mature collections of hostas, daylilies, astilbes, iris, phlox, sedum, cimicifuga, sempervivums, and over 200 lilacs (the largest collection in New England) beneath a canopy of mature deciduous and coniferous trees. A diverse collection of Maine wildflowers and ferns border an old lane which rises up a wooded hill behind the barn.​

From Christmas until Mother’s Day the McLaughlin Garden and Homestead is closed to the public except for scheduled events.