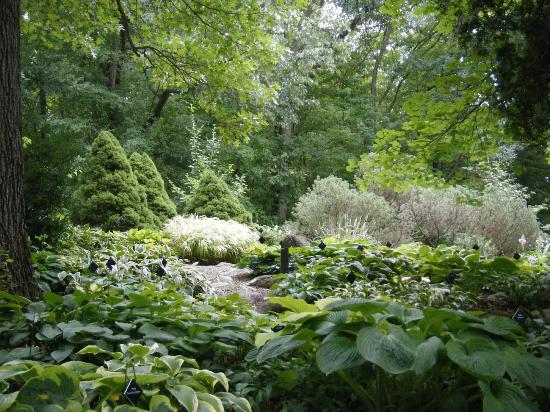 Hidden Lake Gardens was donated to Michigan State University (then Michigan State College) in 1945 by Harry A. Fee. had always dreamed of owning a lake, and, upon his retirement in 1926, he purchased Hidden Lake along with 200 acres of land surrounding it.​

He began to grow nursery stock, which he planted on his land in an effort to create a "series of pictures," a philosophy that continues today. Mr. Fee described Hidden Lake Gardens as a "dream-as-you-go development." He built a road in from Hwy. 50 and landscaped it with a shrub and perennial border.

With his generous endowment the Gardens has continued to develop with land acquisitions and the original 200 acres have grown to 755 acres. This includes a 120 acre arboretum that was begun in 1962 and consists of plant groups such as crabapples, lilacs, maples, evergreens, and shrubs.​

There are notable bonsai and hosta collections, dwarf and rare conifers, and a conservatory with a temperate house, a tropical dome, and an arid dome.

In addition to more than 6 miles of one-way paved drives, there are 12 miles of hiking trails.