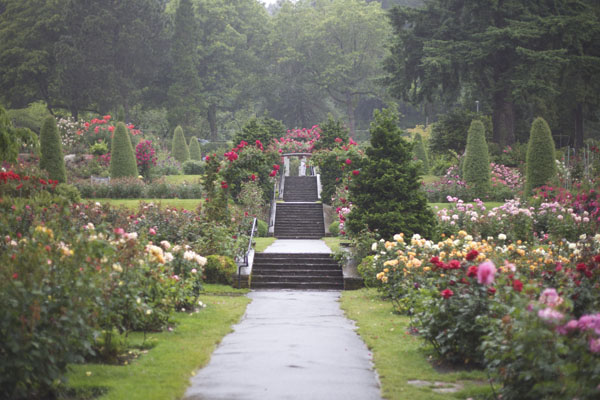 There are over 10,000 rose bushes of approximately 650 varieties. The roses bloom from April through October with the peak coming in June, depending on the weather.[1] New rose cultivars are continually sent to the garden from many parts of the world and are evaluated on several characteristics, including disease resistance, bloom formation, color, and fragrance.

In 1915 Jesse A. Currey, president of Portland's Rose Society and Sunday editor of the Oregon Journal, convinced city officials to institute a rose test garden to serve as a safe haven during World War I for hybrid roses grown in Europe. Rose lovers feared that these unique plants would be destroyed in the bombings. The Park Bureau approved the idea in 1917 and by early 1918, hybridists from England began to send roses. A decade before the test garden was proposed, 20 miles of Portland's streets had been lined with rose bushes for the 1905 Lewis and Clark Centennial Exposition. Portland was already dubbed "The City of Roses" and the test garden was a way to solidify the city’s reputation as a rose-growing center internationally.

The garden covers 4.5 acres in several tiers facing downtown Portland and the Willamette River. On clear days, there are views of the Cascade Range, with Mount Hood featured prominently.

Numerous pieces of notable public art are featured in the garden.​​