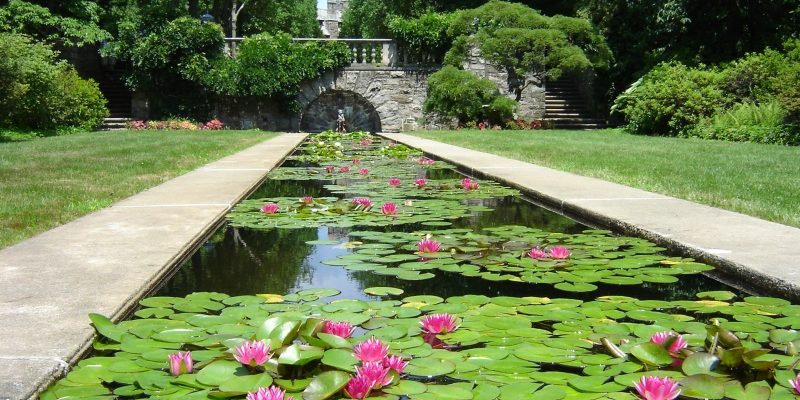 The New Jersey State Botanical Garden is a part of Ringwood State Park, New Jersey Division of Parks and Forestry, and is on both the State and National Registers of Historic Places.

The Garden forms the heart of a property that Francis Lynde Stetson (1846-1920) assembled from pioneer farmsteads in the Ramapo Mountains. Stetson named his country estate “Skylands Farms” and maintained a stylish mansion of native granite, a working farm with more than thirty outbuildings, gardens and a vast lawn that also served as a nine-hole golf course. He was a trustee of the New York Botanical Garden and chose Samuel Parsons, Jr., a protégé of Frederick Law Olmsted, to lay out his estate. A subsequent owner, Clarence McKenzie Lewis, was also a trustee of the New York Botanical Garden and he set out to make it a botanical showplace.

Most of the trees now framing the house were planted at that time, including the magnificent copper beeches. Lewis stressed symmetry, color, texture, form and fragrance in his gardens. He wanted to appeal to the senses. For thirty years, Lewis collected plants from all over the world and from New Jersey roadsides. The result is one of the finest collections of plants in the state. Lewis had over 60 gardeners working in peak seasons.

In 1984,  the 96 acres surrounding the manor house were designated as the State’s official botanical garden.