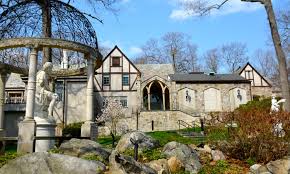 The Stamford Museum & Nature Center is dedicated to the preservation and interpretation of art and popular culture, the natural and agricultural sciences, and history. It is housed in the former home of fashion designer and department store owner Henri Willis Bendel (1868 - 1936). Several 19th-century Italian marble sculptures from Bendel's collection are to be seen in the gardens.

The SM&NC collections have grown since the founding of the Museum in 1936. Today, the Stamford Museum maintains a permanent collection of more than 20,000 objects. The collection is defined by five categories: American Art, late 19th century - 1965; Native American Art & Artifacts; Natural History of New England; American History and Culture (pre-1940); and Connecticut Agriculture, late 19th century to 1940.

The Stamford Museum also maintains a permanent collection of works by Gutzon Borglum (1867-1941), a Stamford resident best known as the creator of Mount Rushmore. It is the largest museum-owned collection of Borglum's works in the country.