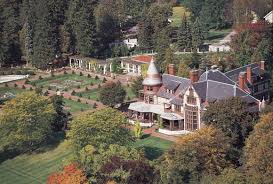 This 50-acre estate is one of just two public gardens in all of the New York State Parks System, with a Gilded Age mansion (named "sunny hill" in German) and beautifully landscaped grounds.

SItting atop the sun-bathed hill of the estate is a 40-room Queen Anne-style mansion, built between 1885-1887. Visitors can view many of its stately rooms, including the impressive Great Hall, the Billiard and Trophy Rooms, the Library, Drawing Room, Dining Room, and upstairs, the Master Bedroom and several additional guest rooms. The ground floor is handicap-accessible.

The signature landscaping seen today in nine formal gardens bears the imprint of philanthropist Mary Clark Thompson, who brought home ideas and art from her many trips to European and Asian locales. Mrs. Thompson involved hundreds of workers between 1902 and 1919 in a re-design of the gardens, assisted primarily by Boston landscape architect Ernest Bowditch, and later, his assistant John Handrahan.​

The Greenhouse complex, built between 1903-1915, is one of the few remaining intact Lord and Burnham Greenhouses in the United States. Today, five of the greenhouses are open to the public for touring, showcasing a return to their original, utilitarian uses.

In 1906, Mrs. Thompson had this garden fashioned from a smooth lawn by a Japanese landscape designer and his team of workers. Water flows from a large cascade, passing the Tea House, and underneath 5 bridges. A 12th-century bronze Buddha sits nearby. Additional extraordinary theme gardens include garden sculptures, pools, sunken beds, and fountains. ​

An Arts in the Garden weekend is an annual event, with 100 Juried Artists Exhibiting and selling their work.​​