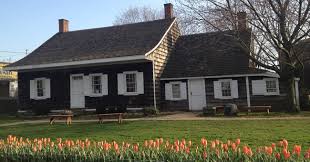 Almost 5 centuries ago, in what is now the Flatbush neighborhood of Brooklyn, Dutch Farmer Pieter Wyckoff purchased land, built a house, and  with his wife Grietje raised 11 children.

The Wyckoff House & Association, Inc., was first formed in 1937 when a large group of Wyckoff descendants gathered together to purchase and preserve their ancestral home, the Pieter Claesen Wyckoff House. In the face of potential demolition, the family joined forces with community activists to protect the house over the next few decades. In the 1960’s the Wyckoff House Foundation gained ownership of the property and donated it to the New York City Parks Department. In 1965 the house became the first structure in New York to be designated a historic landmark. After surviving a fire in the late 1970s, the house was finally restored in the early 1980s. Since 2001, the house was opened as a public museum.

In partnership with NYC Parks, the Wyckoff Museum stewards 1.5 acres of some of the last remaining undeveloped farmland in Brooklyn. Despite rapid urban expansion, certain sections of south-east Brooklyn (including Flatlands, Flatbush and Canarsie) remained semi-rural until the middle of the twentieth century. By the 1940’s the neighborhood around the property was largely developed. Today, the house and gardens stand as a small legacy to the centuries of agricultural labor that helped shape Brooklyn, Long Island, and New York City.