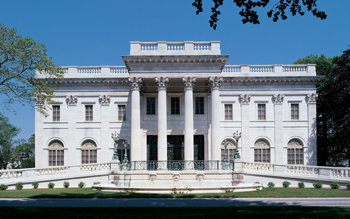 Marble House was built between 1888 and 1892 for Mr. and Mrs. William K. Vanderbilt. It was a summer house, or "cottage", as Newporters called them in remembrance of the modest houses of the early 19th century. Mrs. Vanderbilt envisioned Marble House as her "temple to the arts" in America.

The house was designed by the architect Richard Morris Hunt, inspired by the Petit Trianon at Versailles. The cost of the house was reported in contemporary press accounts to be $11 million, of which $7 million was spent on 500,000 cubic feet of marble. Upon its completion, Mr. Vanderbilt gave the house to his wife as a 39th birthday present.

The Preservation Society acquired the house in 1963 and in 2006 Marble House was designated a National Historic Landmark.​