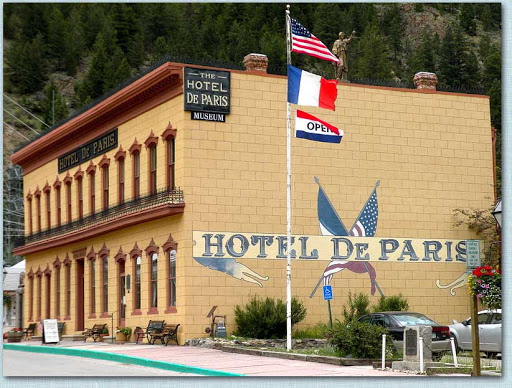 Hotel de Paris Museum, located in the Georgetown-Silver Plume National Historic Landmark District, is one of the Old West's most colorful gathering places. It is a site of the National Trust for Historic Preservation, is owned and operated by The National Society of The Colonial Dames of America in the State of Colorado.

Louis Dupuy, a French immigrant, established the Hotel in 1875 and enlarged it to its present appearance by 1893. The Hotel de Paris was in the midst of the mining frontier while operating as a hotel, boarding house, residence, restaurant, and showroom for traveling salesmen from the 1870s to the 1930s.

In 1903, Sarah Burkholder acquired the Hotel and operated it with her daughter Hazel McAdams as a boarding house until 1939. It was acquired by the Colonial Dames of Colorado in 1954 as a historic preservation project and restored to its 1890s appearance as a historic site museum.