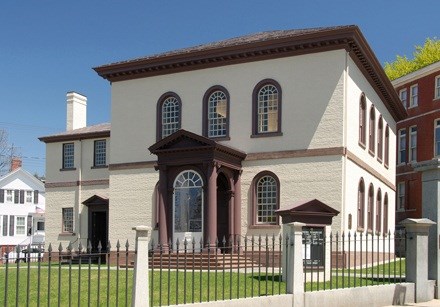 Touro Synagogue, dedicated in 1763, is the oldest synagogue building in the United States. A structure of great beauty and design, steeped in history and ideals, the synagogue is considered one of the ten most architecturally distinguished buildings of 18th century America and the most historically significant Jewish building in the United States.

The congregation was founded in 1658 by the descendants of Jewish families who had fled the Inquisitions in Spain and Portugal and who themselves left the Caribbean seeking the greater religious tolerance that Rhode Island offered.

Touro Synagogue was designated a National Historic Site in 1946.  Touro Synagogue, the home of Congregation Jeshuat Israel holds religious services year around on Friday nights and Saturday mornings and on all Jewish holidays. Services are orthodox using the Nusach Sephard prayerbook. There is separate seating for men and for women during services.

There are no tours on Saturdays or Jewish holidays