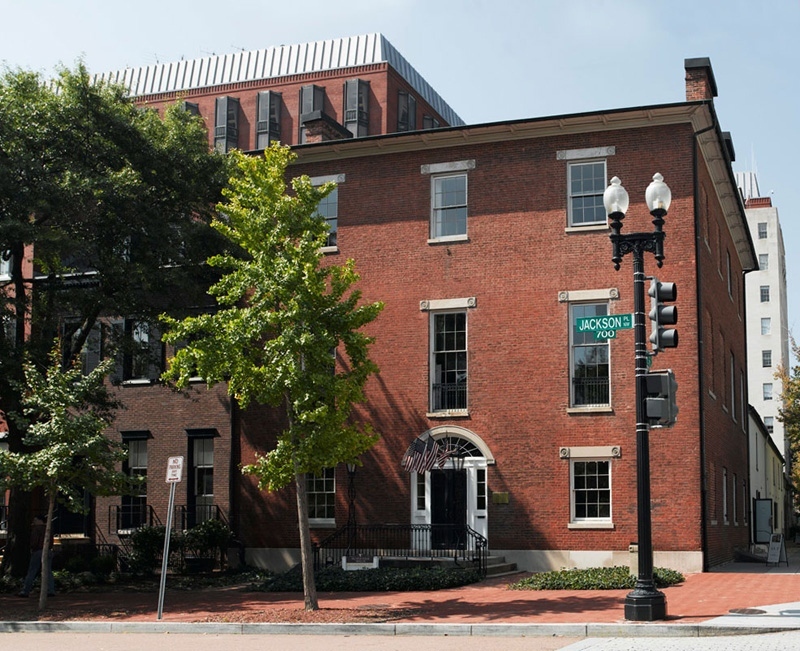 Located across from the White House, this is one of the oldest surviving homes in Washington DC. Designed by architect Benjamin Henry Latrobe in 1818, this historic home was the first and last private residence in Lafayette Square. The Decatur House, a National Trust Historic Site, is an excellent example of Federal-style architecture, featuring the only preserved urban slave quarters in D.C, and one of the only in existence nationwide. Standing for 200 years, Decatur House is a testament to the complex history of the capital city.

The home was commissioned by Commodore Stephen Decatur who made a name for himself during both the Barbary Wars and the War of 1812 as a brave Naval hero. Unfortunately, he and his wife Susan only resided there a mere 14 months, as Decatur was mortally wounded in a duel. Susan then rented the home to the likes of Henry Clay, Edward Livingston, and Martin Van Buren. After Susan sold the home in 1836, the Decatur House continued to house many notable occupants, as well as both free and enslaved servants. The wealthy hotel and tavern owner John Gadsby initially purchased Decatur House from Susan; but upon his death, his wife, Providence, again rented out the home.

The Federal government occupied Decatur House during the Civil War until Edward Beale purchased the home in 1871. The home stayed in the Beale family until 1956, when Marie Beale bequeathed the property to the National Trust for Historic Preservation as part of a concerted effort to preserve Lafayette Square's 19th-century charm. The Decatur House and its storied history is a hidden gem within the president's neighborhood.