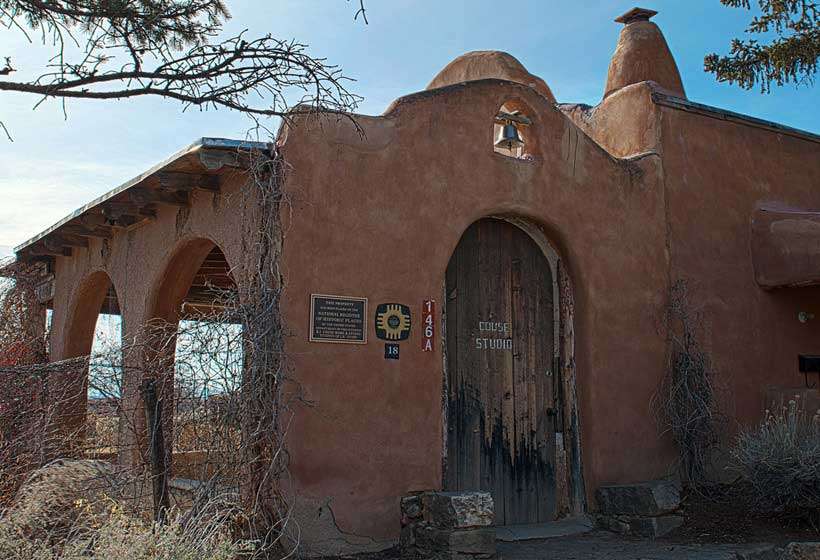 Explore the studios of E. I. Couse and J. H. Sharp, founding members of the Taos Society of Artists. These two painters helped create the cultural fabric of Taos and the West as we know it today. Tours are available by appointment only.

In 1908 Sharp established a permanent home in Taos, buying a house on Kit Carson Road. The next year he bought land to the east, including an old Spanish chapel that he converted into a studio. Sharp's chapel studio was originally built as a family chapel by Juan de Luna around 1835. It later passed to the Diocese in Santa Fe, from whom Sharp bought it. He called it "The Studio of the Copper Bell" and used it for six years, before building a larger studio on adjacent land to the south.

Sharp's second studio, completed in 1915, began as a small house which he enlarged into a two-story structure, with an enormous studio window to the north.

The Couse house is still furnished with the original furniture and household items that belonged to the artist and his wife. Paintings from various periods of Couse's career are on view in his studio and other parts of the house. The property purchased by the Couses on Kit Carson Road in 1909 appealed to them because there was room to add on a spacious studio.  Couse’s design for the addition involved removal of the south wall of the original adobe house and extending the room to double its size.  A large window facing true north was built above the pre-existing roof line.