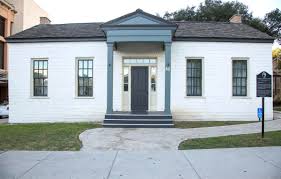 This is the home of the “Messenger of the Alamo”.

Far more than just a survivor of the Alamo, Susanna Dickinson’s life spanned the entirety of early Anglo Texas: colonial pioneering, revolution, frontier statehood, and urbanization. She embodied the experience of real Texas women who navigated the stark challenges of those times. She took life as it came, lived it on the best terms she would get, and achieved a measure of contentment in their later years. She was nearly 70 when she died in 1883. She was rich and famous. Although she had had numerous husbands she remained true to the memory of her first husband and great love who fell at the Alamo.