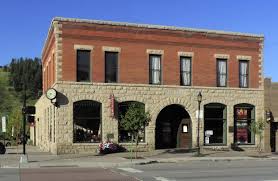 The mission of the museum is to present fine art to the public, reflecting the culture and heritage of Northwest Colorado.

In 2005, when the First National Bank Building (Rehder Building) on 8th and Lincoln was bequeathed to the City of Steamboat Springs by the estate of Helen and Henry Rehder, with the stipulation that the building be used as a museum, the Steamboat Art Museum (SAM) incorporated and opened its first exhibit in the historic building in December of 2006.

The Rehder Building was added to the National Registry of Historic Places in 1994 and is included in a new designation of the Downtown Historic District by the State of Colorado. Also a feature in a historic landmark walking tour hosted by the Tread of the Pioneers museum.