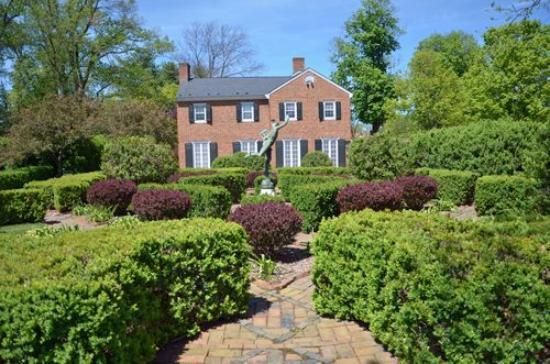 The Glen Burnie House sits on land that Winchester-founder James Wood surveyed, claimed, and then settled in 1735. The oldest portions of the house were built by Wood’s son Robert in 1794 and 1797. After passing through generations of Wood and Glass families, the 254-acre Glen Burnie property came to be owned by Wood descendant Julian Wood Glass Jr. (1910–1992), who preserved and renovated his ancestral home from 1958 to 1959. He transformed the house into an opulent country retreat surrounded by six acres of formal gardens and furnished with one of the most remarkable private collections of decorative arts ever assembled in the Shenandoah Valley.

As a condition of his will, in 1997 the house and the seven-acres of gardens were opened to the public on a seasonal basis. They are now an important part of the Museum of the Shenandoah Valley (see separate listing).

The Glen Burnie House was added to the National Register of Historic Places in 1979.

Visitors may experience the first floor of the house on self-guided tours. Along with the display of decorative objects collected by Glass, interpretive panels tell the story of the house and the people who have lived in Glen Burnie over the generations.