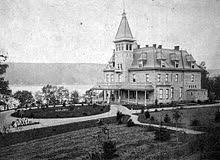 ssociated with the Hudson River Museum, Glenview is an 1877 Gilded Age home on the National Register of Historic Places, designed by architect Charles W. Clinton.

Glenview was built by John Bond Trevor, a highly successful stockbroker, who, like many other businessmen of the late 19th century, preferred to live in comfort in the newly accessible suburbs of New York City.

The exterior was designed in the height of eclectic fashion. With elements of Victorian Gothic and French Second Empire design prevailing, its grey stone facade was constructed of blocks hewn from a Hastings-on-Hudson quarry, and with decorative sandstone lintels and strong courses brought from Indiana. Nothing was spared to make Glenview a paragon of taste, luxury, and modern comfort. It had indoor plumbing, gas illumination, and a coal burning furnace to circulate warm air throughout its 37 rooms.Specimen trees like copper beech, oriental pine, and ginkgo were brought in for placement in attractive sites on the 23 acres.

In 1923 the house and its furnishings were put to auction. The City of Yonkers purchased the house to use as a museum, but Glenview’s furnishings were scattered among many buyers. To make Glenview more useful as a museum, the City removed many of its original fireplaces and changed the interior walls to make large rooms out of small ones on the upper stories. However, the west side of the first floor, with its fine woodwork, tiles and staircase, remained relatively untouched.

The Hudson River Museum had the elaborate stenciling in these rooms restored to its original appearance. Descendants of the original Trevor family have provided photographs and other family records to aid the staff in documenting the interiors as they appeared in the last quarter of the 19th century. Although the present furnishings are not the ones used by the Trevor family, they are appropriate to the period. And today’s visitors can see the tiles, woodwork, and ceiling decorations just as they appeared in 1877—the start of the Gilded Age in America.

Glenview is open to the public on Saturdays & Sundays from 12–5pm. Guided tours of Glenview, including Nybelwyck Hall, are offered Wednesday through Sunday at 1 & 3pm (free with Hudson River Museum admission).