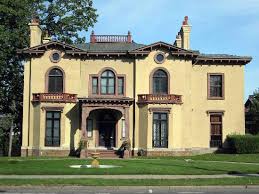 Today, as part of the Munson-Williams-Proctor Institute’s Museum of Art, Fountain Elms is home to the museum’s decorative arts collection which is comprised, in part, by objects collected by the Williams and Proctors during their lifetimes such as American and European paintings, Asian ceramics, European watches, thimbles, playing cards, souvenir spoons, canes, fans, and autographs. The period room settings and changing exhibitions in Fountain Elms provide the stylistic, historical, and social contexts for the entire decorative arts collection. The second floor features open study storage and changing exhibitions, as well as the PrattMWP Gallery which showcases works by students, faculty, and invited artists.

The Italianate house known as Fountain Elms stands today as a reminder of the imposing residences which once lined both sides of Genesee Street in Utica, NY. Helen Munson Williams (1824-94) and James Watson Williams (1810-73) built Fountain Elms as their family home in 1850 working with Albany, NY, architect William Woollette.

After their marriage in 1894, Rachel Munson Williams Proctor and her husband Frederick Proctor (1856-1929) lived in Fountain Elms and acquired works of art and furniture to update the interior of the house along with numerous physical changes. Following Maria’s death in 1935, and the opening of the Institute in 1936, Fountain Elms served for many years as the Museum’s galleries with assorted interior alterations creating meeting rooms and exhibition spaces.

With the construction of the Philip Johnson-designed Museum of Art building in 1960, Fountain Elms was returned to the period of the 1850s. The work made no attempt to recreate the original interiors of the Williams home as many of the family furnishings from the 1850s had been disposed of. The four downstairs rooms were returned to their original functions and, with purchased antique furnishings and the reproduction wall coverings, draperies, and carpets, the rooms now present the appearance of a wealthy home of the mid-19th century.