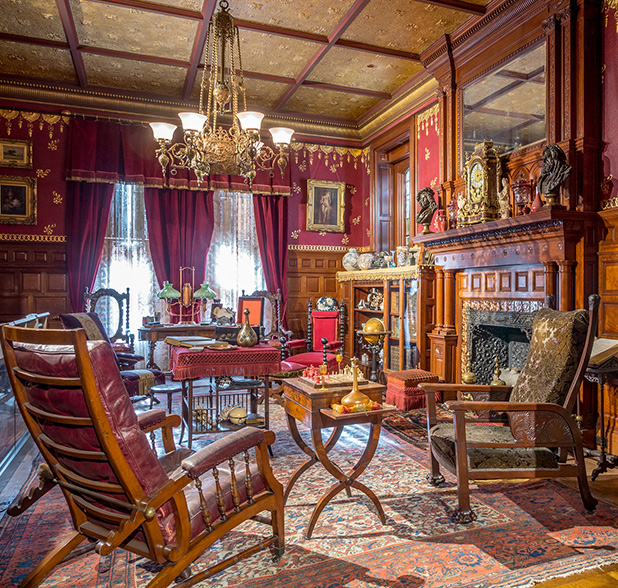 Built in 1885 for Jeannette and John Holme Ballantine of the celebrated Newark beer-brewing family, this brick and limestone mansion originally had 27 rooms, including eight bedrooms and three bathrooms.

Part of The Newark Museum (see separate listing) since 1937, the house was designated a National Historic Landmark in 1985.

Two floors of the Ballantine House are interpreted as a suite of galleries called "House & Home," which includes eight period rooms which are restored to 1891. Together they represent a "case study" of what the "ideal home" meant in America over a century ago. The first-floor rooms include the Billiard Room, the Parlor, the Reception Room, the Library and the Dining Room. The Music Room offers an interactive experience called Make Yourself at Home

Two hallways and six thematic galleries arefilled with things that might have been found in people's homes from the 1650s to the present.  Upstairs, three private family rooms have been restored to their Victorian look: the Master Bedroom, Mrs. Ballantine's Boudoir and Alice Ballantine's Bedroom.

Other rooms on this floor are used as galleries. In these galleries, objects from the Museum's decorative arts holdings illustrate various themes relating to the changing idea of "home" from the 1650s to the present.

The Ballantine House is a wing of the Newark Museum and is open as part of the museum during regular museum hours.