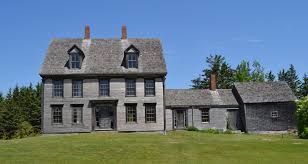 Olson House is a 14-room Colonial farmhouse  which was made famous by its depiction in Andrew Wyeth's Christina's World.

The house and its occupants, Christina and Alvaro Olson, were depicted in numerous paintings and sketches by Wyeth from 1939 to 1968.

The house was designated as a National Historic Landmark in June 2011. The Farnsworth Art Museum owns the house; it is open to the public.