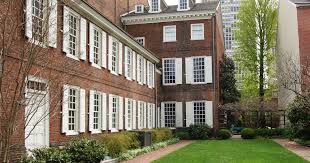 One of the Phildelphia Society for the Preservation of Landmarks houses, Powel House is one of the finest examples of Georgian architecture in the United States. Built in 1765 by merchant and businessman Charles Stedman.

Home to Samuel and Elizabeth Willing Powel during the American Revolution,  famous visitors during their residency included George & Martha Washington, Benjamin Rush, Benjamin Franklin, the Marquis de Lafayette and John Adams, who wrote of his enjoyment of a "most sinful feast" after a particular visit.

During  the early 20th century, much of the interior architectural detail was sold to the Philadelphia Museum of Art and the Metropolitan Museum of Art. Original architecture elements can be viewed  in the Powel Room at both museums.