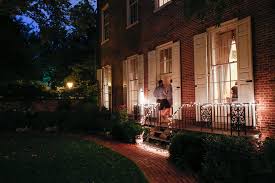 One of the Phildelphia Society for the Preservation of Landmarks houses, the Hill-Physick House was built in 1786, a square, four-story brick house which is the only free-standing Federal townhouse remaining in Society Hill.

An exceptional example of the Federal style, i is decorated with outstanding examples of French-influenced Neoclassic furnishings, popular during Dr. Physick's time in the house.