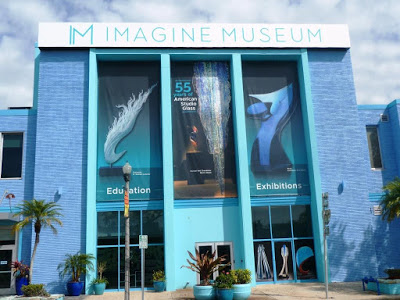 Imagine Museum is dedicated to Contemporary American Studio Glass, telling the story of the movement from its beginnings in the early 1960s, through to the present.

Currently the museum is home to more than 500 pieces of American Studio Glass and represents more than 55 artists who were and are integral to the development of this medium as a fine art form.

In the 1960s, various innovations allowed individual American artists to work with melted glass in ttheir own studios, outside of the factory setting.  Since then, American artists have continued to work in new innovative ways, using the material and creating works of art not seen before.

The museum presents the significant advancements and contributions made by these American artists to the overall visual dialogue of the late 20th century and early 21st century. An art movement is defined by new ways of creating works of art as well as how it pioneers a path to make an enduring historical imprint on the world of art.