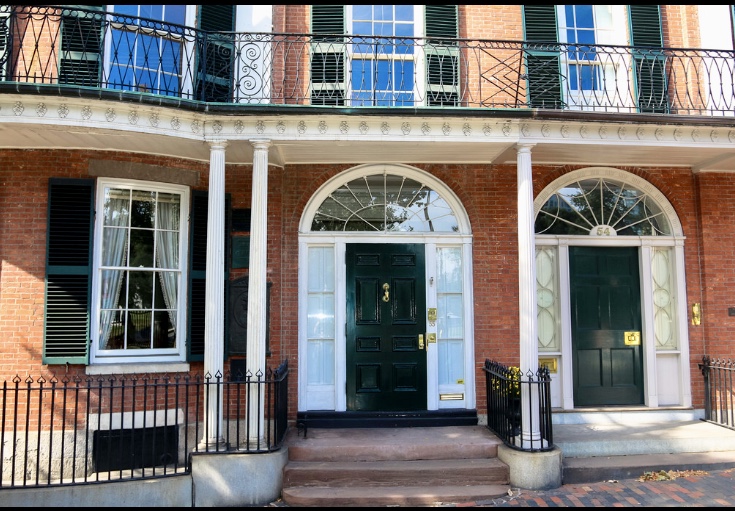 The William Hickling Prescott House and the adjoining home at 54 Beacon Street, were built in 1808 for the Boston merchant, James Smith Colburn. These Federal period twin houses overlook Boston Common. The land was once owned by John Singleton Copley, America's most accomplished colonial portrait painter.

These 5 1/2 story brick town houses were designed by the  American architect Asher Benjamin and are highlighted by two bow-fronts. Gracious geometric forms such as these accentuate the rhythm of the exterior design as well as create beautiful oval interior spaces. The building's Federal style features include a ground floor colonnade with delicate fluted Doric columns, elliptical fanlighted entrances with flanking side lights, colossal pilasters, elaborate iron balconies, and an ornamental balustrade over the cornice.

In 1944 the house was purchased by The National Society of The Colonial Dames in The Commonwealth of Massachusetts. It was designated a National Historic Landmark in 1964.

The extensive collections of furniture and decorative arts have been generously donated by Colonial Dames. Chinese export porcelain and English ceramics are permanently on view.

The remarkable costume collection, dating from the 18th through the 20th centuries, includes dresses, fans, shoes, parasols and children's clothing, selections of which are on continuous display. The collection is available to researchers by appointment.