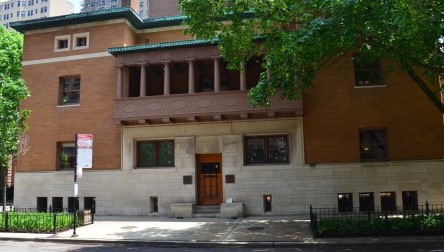 Located in the Gold Coast neighborhood of Chicago, within the Astor Street Historic District, the Charnley-Persky House (1891-1892) was designed by Louis Sullivan with assistance from his junior draftsman, Frank Lloyd Wright. The house is recognized as a pivotal work of modern American architecture. With the Charnley House, Sullivan rejected the historical details common to Victorian architecture in favor of abstract forms that later became the hallmarks of modern architecture.

The exterior of Charnley House is a virtually unadorned brick and limestone facade that commands its corner location. The dramatic interior of the house is dominated by an atrium that soars from the first floor hall to a skylight two floors above. The house is symmetrical in plan, with one room located on either side of the central atrium on each floor. The ornament found throughout the interior and exterior of the building reflects both Sullivan's love of sinuous plant forms intertwined with underlying geometric forms and Wright's variations of these themes.

The National Historic Landmark building serves as the headquarters of the Society of Architectural Historians.  The Charnley-Persky House is among the 13 Wright-designed buildings featured on the Frank Lloyd Wright Trail.