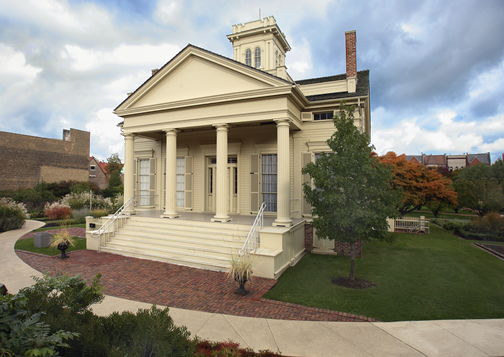 Built in 1836 for Henry B. Clarke, the Clarke House Museum is Chicago’s oldest house. The gracious Greek Revival style house shows what life was like for a middle-class family in Chicago during the city’s formative years before the Civil War. Its fascinating history began at a time when Chicago received its city charter and much of the area was still undeveloped prairie.

Over the years, the house survived fires, belonged to a church, and was moved twice – during the second move, the house was stuck in the air for two weeks. The house is now located in the Chicago Women’s Park in the Prairie Avenue Historic District, and operated as a museum by the Chicago Department of Cultural Affairs and Special Events. Admission is free.

The Clarke House was built by a local carpenter using readily available pattern books or builders’ guides. Such publications provided floor plans for Greek Revival and other styles of houses, drawings of moldings, staircases, and additional details, as well as practical suggestions on the use of wood, stone, and other materials. With such guidance at hand, a skilled carpenter could produce a fashionable, well designed home.

The Clarke House Museum Collection is representative of what the Clarke family would have owned and furnished the home with during their residency (1836-1872), consisting of period furniture, decorative arts, ceramics, glassware, and other household items which help interpret family life in pre-Civil War Chicago.

The collection also contains architectural fragments, original paint and wallpaper samples, photographs and publications from the occupancy of the St. Paul Church of God in Christ (owners 1941-1977), and archives related to the restoration of the house in 1977 and 2004.