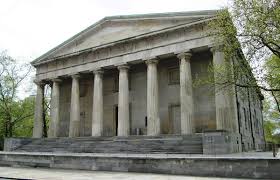 Portrait Gallery in the Second Bank

Part of the National Park Service, the Second Bank of the U.S. is home to a Portrait Gallery with a permanent collection of over 150 portraits of 18th and 19th century political leaders, military officers, explorers and scientists, including many by noted artist Charles Willson Peale.

The building itself is a work of art. Designed by architect William Strickland and built between 1819 and 1824, the Second Bank is a fine example of Greek Revival architecture. Strickland looked to the Parthenon in Greece as his muse, borrowing its blank pediments and Doric columns. After the demise of the Bank in 1836, the building changed hands and function, eventually becoming the Custom House in Philadelphia.