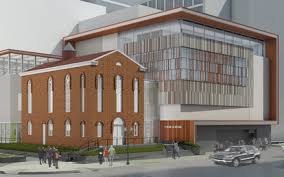 Founded by volunteers in 1960, the Jewish Historical Society of Greater Washington was incorporated in 1965 as a nonprofit organization dedicated to interpreting Jewish history in the greater Washington area. In 1969, galvanized by the pending demolition of the historic 1876 Adas Israel synagogue, the oldest synagogue building in the nation's capital, Society members arranged for the historic building to be moved three city blocks to its present location (more photos of the move!). After extensive restoration, the synagogue was rededicated and opened to the public as the Lillian & Albert Small Jewish Museum in 1975.

The Society is planning the future move of the historic synagogue to a new site -- the corner of Third and F Street, NW. The new location will allow the synagogue to regain its original orientation facing east toward Jerusalem and will provide the Society with land on which to build an adjacent museum. Planning for this new facility has begun.

During this time the Lillian and Albert Small Jewish Museum is closed, but the Jewish Historical Society is still open.