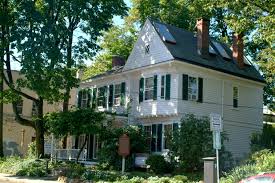 The Edward Hopper House celebrates Edward Hopper’s legacy by preserving his birthplace, family home and archive, while serving as a resource for scholars and artists and nurturing community engagement with the arts.​

Edward Hopper’s (1882-1967) birthplace was built in 1858 by the artist's maternal grandfather.  The house served as Hopper's primary residence until 1910 when he move into New York CIty. The house remained in the family until the late 1960s, when fell into disrepair. Saved from demolition by local residents, Hopper House has been a non-profit art center since 1971.  It is now listed on the National Register of Historic Places.

Hopper House features exhibitions of 20th century and contemporary art, with one gallery is dedicated to early Hopper work and memorabilia and rotating exhibits relating to Edward Hopper.