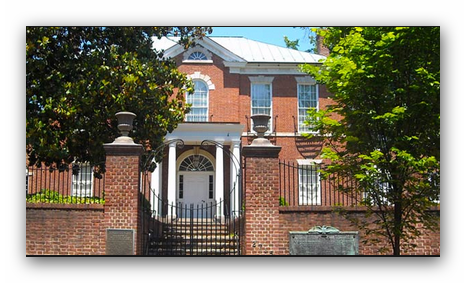 Reflecting the original early 19th century character of the home, Dumbarton House’s museum collection of more than 1,000 pieces includes furniture, paintings, textiles, silver, and ceramics primarily from the Federal period, 1789 to 1825. In addition, the museum houses a manuscript and document collection including journals, account books, and letters that together document nearly 300 years of Nourse family life -- Nourse being the name of the first family to live in Dumbarton House (1804-1813).

The National Society of The Colonial Dames of America restored the Federal-period property in Georgetown and renamed it Dumbarton House, a reference to the early 18th century name of the tract of land where the home had stood for over 100 years. Shortly after the restoration was completed, in 1932, Dumbarton House opened its doors to the public as a historic house museum.

In the early years of the new nation, the idealized classical ages of Greece and Rome provided inspiration in forging the identity of the American Republic. This neoclassical influence manifested itself in the style of Federal period buildings and furnishings, as seen in the design of Dumbarton House and its collection.