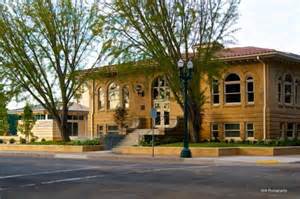 The historic Carnegie Library opened in 1916, one of more than 1,600 libraries built by Andrew Carnegie across the U.S. It served as Turlock’s library until 1968 and has been used as an arts center since 1979.

Re-opened in 2011 after a fire gutted the building, the center hosts exhibitions and cultural events related to regional art and artists, and the history of the Carnegie itself. At least 25% of programming is dedicated to children and teens.