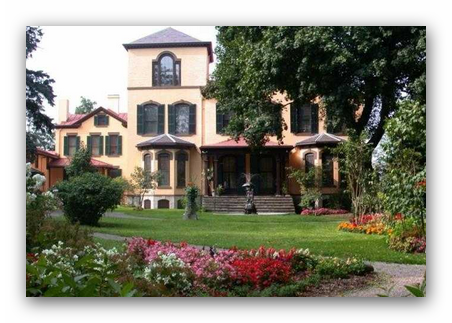 The 30-room historic 1816 home of William H. Seward, secretary of state during the Civil War, houses a large original collection of American art. The historic house has been restored to its original state and is surrounded by two acres of lush garden and trees.

The museum holds many collections relating to the Seward family including the personal library of William H. Seward’s daughter Fanny, considered to be one of the only intact libraries of a 19th century teenager left in existence. Other collections include extensive Native Alaskan artifacts purchased by William H. Seward after he brokered the purchase of Russian America in 1867; a large number of Asian and ancient artifacts acquired by the Seward Family on their many travels throughout the world.

Nationally-recognized artists Emanuel Leutze, Henry Inman and Chester Harding are represented in the museum collection, along with regional painters, John E. Freeman, George Clough and John Carlin, as well as the horse drawn carriage that William H. Seward and Abraham Lincoln shared in Washington D.C. during the U.S. Civil War.