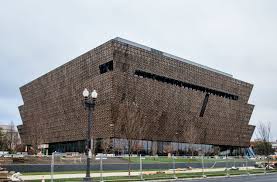 Created in 2003 by an Act of Congress, the Museum actively collects historical artifacts, documents, photographs, audio recordings, moving images, books, and visual arts. Thirteen years in the making, the museum opened its doors in September, 2016.

The visual arts collection concentrates on works created by and about African Americans, presenting history through the lens of the African American artist, as well as non-black artists. The Ernest C. Withers (1922-2007) photographs feature historical moments and cultural subjects.

The Fashion collection runs the gamut of clothing and accessories from the 19th-century to the 1980s, and includes everyday wear to haute couture, as well as theater and performance costumes,. Clothing and bonnets worn by slaves in the mid-1800s appear alongside an elaborately constructed opera cape made by a former slave.

Notable is the collection of 39 objects that belonged to Harriet Tubman, including her personal hymn book published in 1876, and a lace shawl (circa 1897) given to her by England's Queen Victoria.