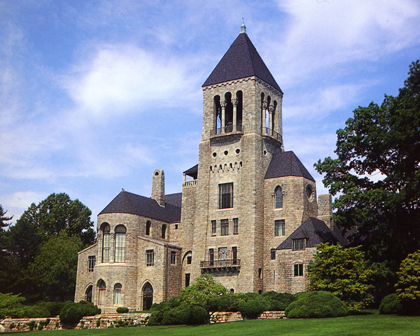 Glencairn (1939) was home to the Pitcairn family for 40 years. Pitcairn designed it as a Romanesque-style “castle” for his collection of medieval objects, purchased as models for building Bryn Athyn Cathedral. Influenced by the American Arts & Crafts Movement, Pitcairn established on-site workshops to produce handcrafted elements for both the Cathedral and Glencairn.

Glencairn is part of Bryn Athyn Historic District, a National Historic Landmark, founded in the late 19th-century by members of the New Church. The District includes two other residences: Cairnwood (a Beaux-Arts mansion) and Cairncrest, plus the renowned Bryn Athyn Cathedral -- all built between 1892 and 1938.