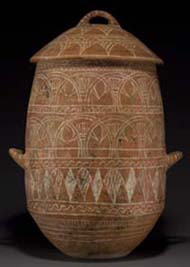 The Museum of Greek, Etruscan and Roman Art occupies 4,000 square feet of space on the main floor of the Walsh Library.

The antiquities collection features more than 260 art objects dating from the 10th-century B.C. through the 3rd-century A.D. The collection spans several periods, Mycenaean, Villanovan, Classical Greece, Geometrical, Archaic Roman, Imperial Roman, Republican, Etruscan, South Italian. There are red-figure and red-and-black-figure ceramics, and the shiny black Etruscan pottery known as Bucchero. There is an array of sculpture and terra cotta heads.

Located in the NYC boro of The Bronx, the museum is open to the general public, free of charge, Monday through Friday 9:00 am – 5:00pm.